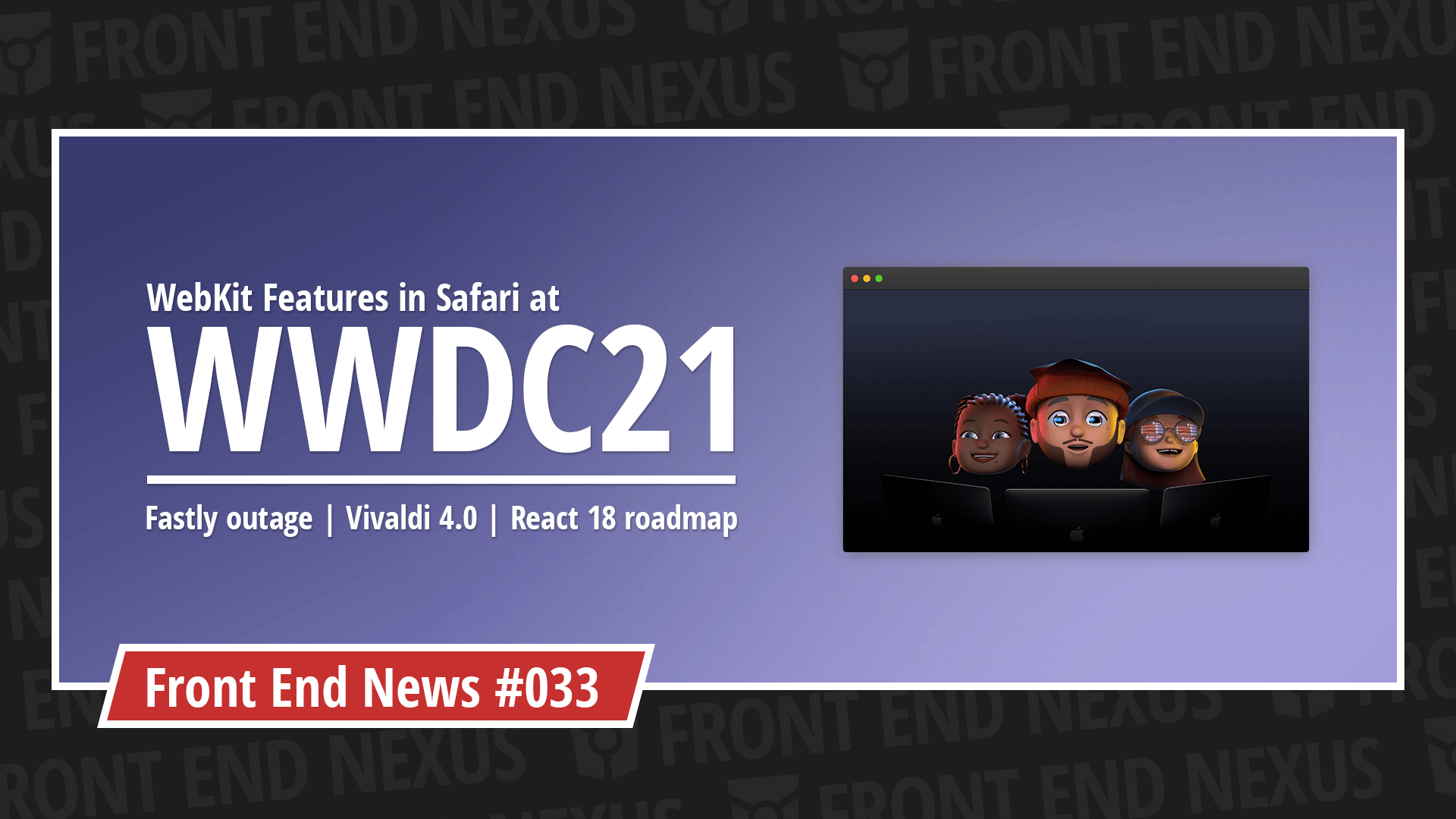 Apple held the attention of the tech world with the WWDC21 event last week. And an important part was taken by the changes coming to WebKit and Safari. Big parts of the Internet suffered a hiccup when Fastly, a major CDN provider, suffered a brief outage. Vivaldi 4.0 starts providing a viable alternative to Big Tech companies, and Microsoft released a transition guide from Internet Explorer to Edge. And the software updates of the week include Cypress v7.5.0, Mocha v9.0.0, the roadmap to React 18, and more.

Apple hosted the 2021 edition of their developer conference last week. There were about 200 sessions this year, but I only picked a handful, related to web technologies. If you want more, I've included a link to the entire set of videos.

The main attraction is Safari 15 Beta. This update will bring important features for web developers, such as support for aspect-ratio for box elements, redesigned form controls in iOS, or support for ES6 Modules in Workers and ServiceWorkers, to name just a few.

What other things were covered? Safari Web Extensions are getting better, and are now available on iOS. Manipulation of web content in apps is now easier with the latest WKWebView additions. Web Authentication is moving beyond passwords. And the Web Inspector Improvements include a new overlay for inspecting CSS Grid containers on your pages, more configurable breakpoints to make debugging simpler, and the ability to create and edit Audits.

I'm stopping here with the enumeration and I invite you, instead, to browse the entire collection of video presentations using the last link in the set below. Enjoy!

How fragile is the Internet?

Many people never heard of Fastly before last week, when a glitch with this large CDN provider caused major outages all over the Internet. The issue was solved fast, but it outlines a possibly larger problem - how fragile is the Internet? I can't answer that question for you, so I've picked up instead a couple of articles that highlight the details of the outage.

Microsoft published a "Getting Started Guide" for people that need to migrate their apps from the old Internet Explorer into the Edge browser.

Vivaldi is definitely aiming high. They just launched version 4 of their browser for both desktop and Android platforms. Their main target is to provide an alternative to "Big Tech" with a set of new features.

The main piece in their arsenal is Vivaldi Translate, a functionality powered by Lingvanex. There are also beta versions for Vivaldi Mail, Vivaldi Feed Reader, and Vivaldi Calendar. Vivaldi claims this update provides a real alternative to the solutions from Google or Microsoft.

That's all I prepared for this issue. If you found something useful please recommend us to a friend and help us continue to grow.