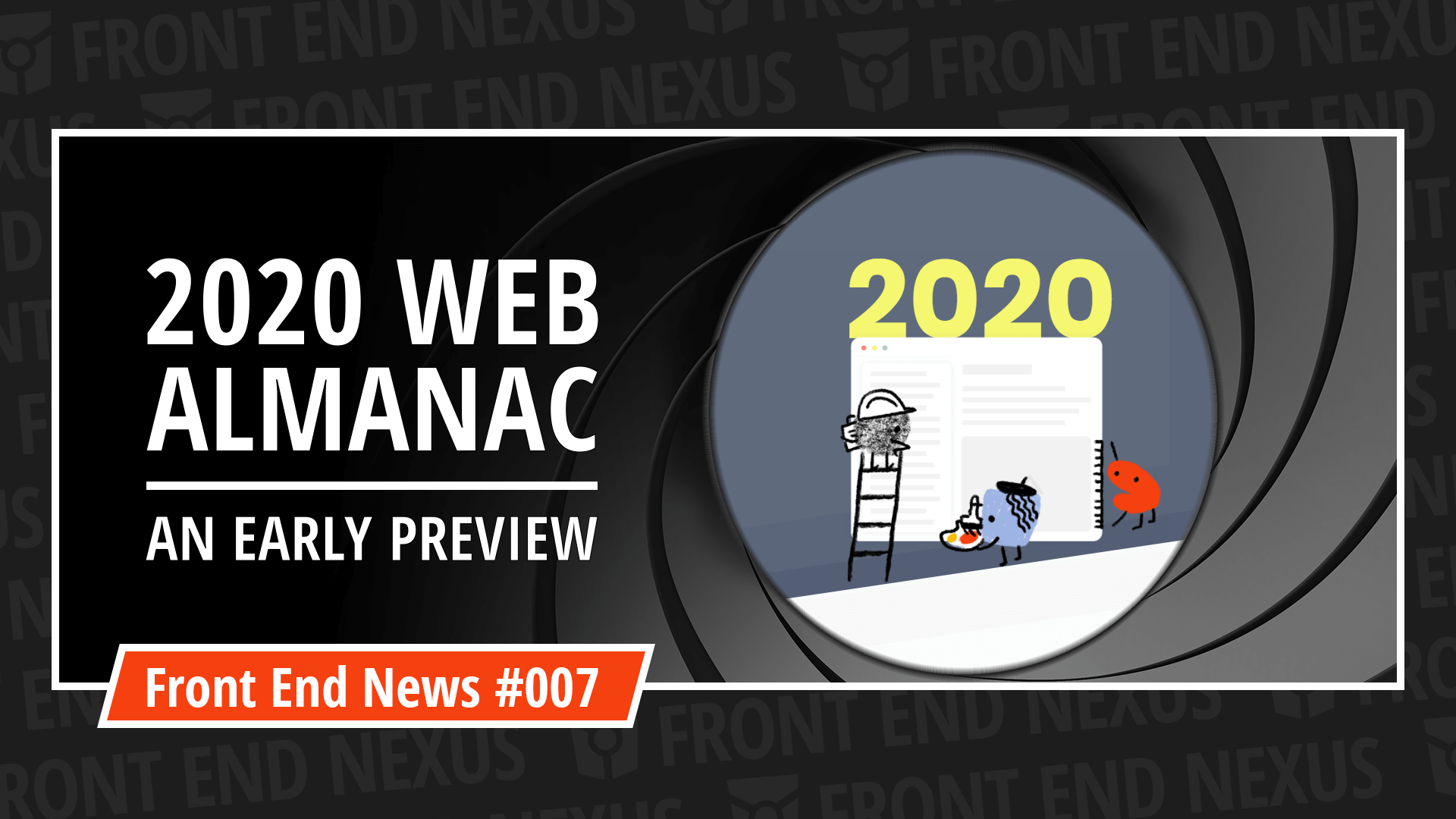 I started this series with the hope that I will take it far into the future. Hence the triple-digit issue number. It means I have to dedicate the #007 edition to the late Sir Sean Connery, who left us very recently. Thank you, Sir, for all the moments of joy you brought us.

It looks like the Web Almanac team is working overtime, as we are already getting a preview of two entire sections. They released the unedited versions for the chapters covering markup and API capabilities.

Some interesting tidbits from the Markup section are:

Just by taking a few glances through these two unedited chapters, it's clear that they contain a treasure-trove of useful information. I am looking forward to seeing the final version.

Microsoft just announced the official release of the fifth major version of their .NET suite. It includes updates to the ASP.NET Core, EF Core, C# 9, and F# 5. It is the first milestone in the company's quest to unify the .NET platform.

The article claims a large number of improvements like better performance across many components, language improvements in C# and F#, better JSON serialization, or better deployment options for your applications.

I am barely scratching the surface here, as the article itself would take 25 pages to print. So without further ado, I invite you to check the links below for (a lot) more information.

Every CSS developer wished, at one point, that container queries would be real. Well, we might just get our wishes to come true, and it might not take that long either.

An announcement on the Chromium mailing list states the intent to prototype this functionality. It will follow a model described by Miriam Suzanne with the following main features:

I found out this exciting news via Bram Van Damme, a Belgian developer, who wrote about it on his blog. I linked his article below, together with the link to the original announcement.

First native masonry, now container queries... Isn't it a great time to be a CSS developer?

Come one step closer with the Raven Technique

Until container queries receive support across all mainstream browsers, you might also want to have a look at an alternative. Dubbed "The Raven technique", it was created by Mathias Hülsbusch and published on the CSS Tricks website

The technique is based on the use of CSS mathematical functions (such as calc(), min(), max(), and clamp()) and CSS variables. The article is well documented and has lots of examples, but it's not light reading. Full details are available using the link below:

I mentioned the State of CSS survey a few editions ago in issue 004. While they are still compiling the data, we are getting an early treat. One of the requests was to mention what we think is missing from CSS. The whole list of answers to that question is now available on its own website. You can skip randomly through the results, or you can download the entire data set.

The Brave team announced that they are phasing out their current referral program before the end of the year. They are planning a replacement, but no more details are available at this time.

We are getting the customary preview into the next update for the DevTools from the Chrome team. The list of updates and improvements is impressive. Here's just a taste of what's available:

and a lot, lot more.

Polypane is a fairly new browser for developing responsive, fast and accessible websites. It has powerful devtools, multiple synced viewports, over 25 debug tools, device emulation, built-in live-reloading, and much more.

You can try Polypane without any costs for 14 days, and the payment plans are starting from €11/ month, with 2 months free included if you pay annually.

They just launched version 4 that brings over a new unified console, docked devtools for isolated panels, improved social media previews, and it runs on Chromium 87. Full details are available in the official release announcement linked below.

I'm adding here a new section where I want to highlight some developer projects that caught my attention. I think it would be a great addition, not just because they are cool and useful, but because I hope they will inspire some of you to create something awesome of your own.

The first project I want to present to you is a just-released ebook on CSS debugging by Ahmad Shadeed. I haven't got it yet (I plan to do it sometime soon), but I've read many of his articles. If the book is at least of that same level, then we're all in for a treat.

Webbed Briefs are brief videos about the web, its technologies, and how to make the most of them (not to mention a healthy dose of British dry humor). It is yet another project of Heydon Pickering, and the pilot episode is out there already. Just don't drink or eat anything while you watch it. Trust me!

I want to give a shoutout to the DeviantArt creator deryamerya who made the 007 rifled gun barrel graphic I used in the cover art for this issue.

That's it for this issue. Have a great and productive week, keep yourselves safe, and I will see you next time!