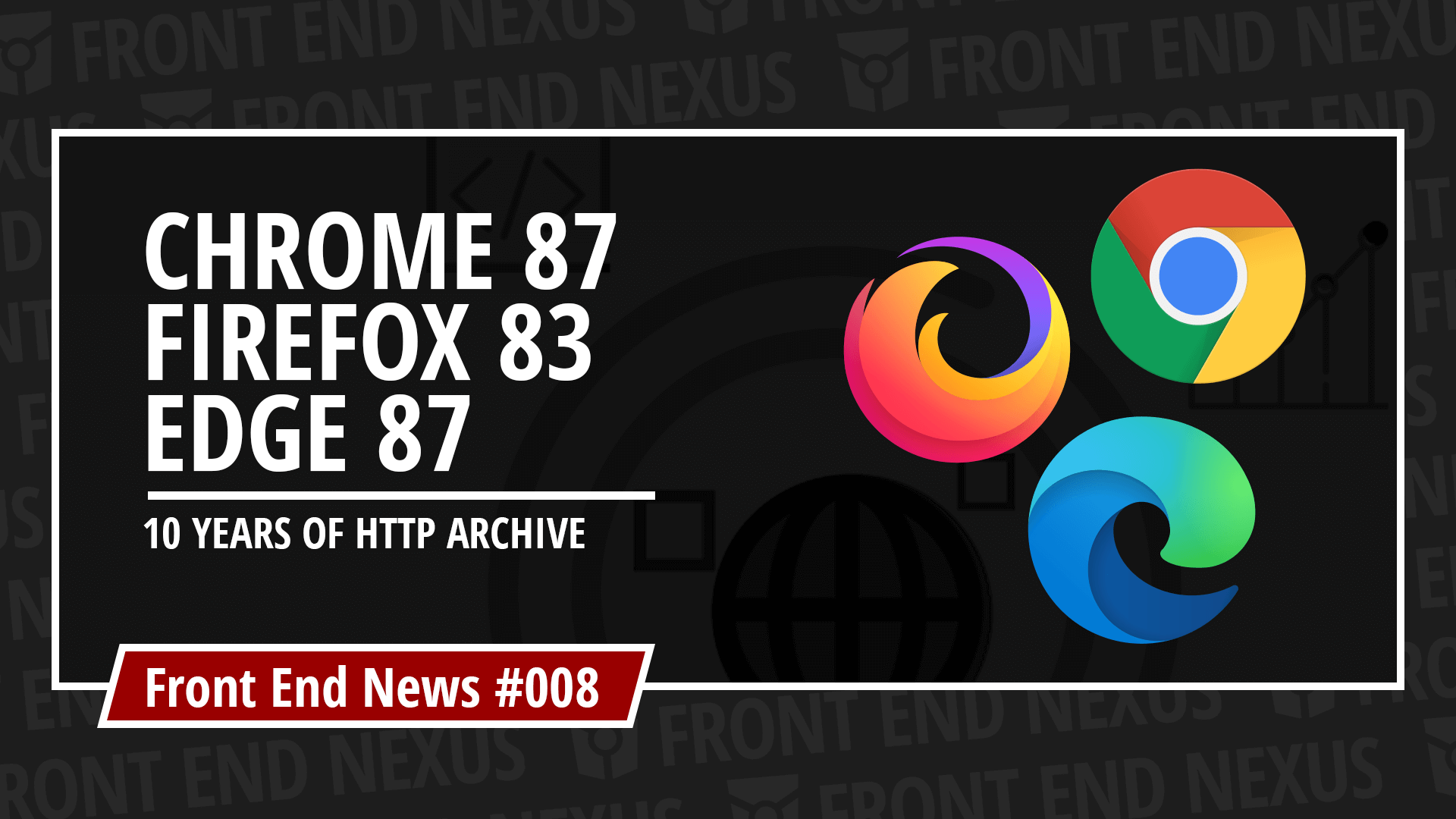 This week brought us a lot of updates to the major browsers. We got Chrome 87, Edge 87, and Firefox 83. Safari Technology Preview 116 has been released, and WebKit has an update for Safari 14 as well. The HTTP Archive celebrates 10 years of existence. In the software updates section, we have stuff like Electron 11, TypeScript 4.1, or Tailwind CSS 2. And I've included some great projects as well because awesome work deserves recognition.

I've talked a lot recently about the HTTP Archive, and it's for a good reason. Their data is a vital part of understanding how the Web grows and evolves. And while we're waiting for this year's edition of their almanac, let's take a moment to consider how all this began in the first place.

10 years ago, Steve Sounders ran a data crawl over a set of over 16K URLs. The results would be the foundation of the HTTP Archive project.

We can now listen to an interview with Steve Sounders, together with two of the project maintainers - Patrick Meenan and Paul Calvano. There is also the original blog post announcing the launch of the project. All this should keep us busy for a little while more. Enjoy!

As I mentioned in the beginning, this week was marked by version bumps to all major browsers. Here are some more details, together with links to the release notes.

Many top-range video conference cameras have controls to pan, tilt, or zoom the view. Bot those features are available on many mainstream webcams as well. With Chrome 87 you can now access these controls once the user gives their permission.

This update also brings improved range requests for service workers, a trial option for the Font Access API, increased support for new text-decoration and underline CSS properties, and more. The full release notes can be accessed using the link below.

I've mentioned one of the updates from this release in one of the previous issues. There is now a list of websites that will be automatically redirected from Internet Explorer to Microsoft Edge.

Many features will be turned on by default from now on. These include the privacy features in kiosk mode, while enterprise users can count on the shopping features and ClickOnce deployment being there ready to use.

There are also changes regarding the policies implemented in Edge. The full list, together with the other details, can be consulted in the official release notes.

The Firefox team has been busy with the latest update. Firefox 83 brings a lot of features and improvements, of which I will only mention a few:

This is also the second-to-last version of Firefox that still supports Flash. It will be gone at the end of January when version 85 will roll out.

The WebKit team rolled up a nice set of features in the latest update for Safari 14:

Of course, there's a lot more going on, like performance improvements or new CSS and JavaScript features. You can check the release notes in the article linked below.

We can now also try the Safari Technology Preview 116. Release notes for this particular update can be found using the following link.

The launch of Electron 11 is, by far, the most important release of this week. Tailwind CSS is another piece of software that got a major version update to v2.0, while TypeScript went up to version 4.1.

The first project is a use-case for the Web Audio API that allows you to pretend you are a blues guitar player. I had a great time playing around with it, although my cat has expressed her reservations about my level of artistic talent. Very loudly.

Wizard Zines is an older project of Julia Evans where she shares her passion for various IT and geeky topics as short comics. The latest addition to the family is a series dedicated to CSS, but there are also ones about Git, the Command Line, SQL, and more.

Most importantly, if you live in a country with lower buying power, you can get a nice discount.

SVGBox is an API for web icons, and it can be an alternative to Font Awesome. It's completely free, delivered over Cloudflare CDN, and includes a large number of icons.

That's it for this issue. Have a great and productive week, keep yourselves safe, and I will see you next time!