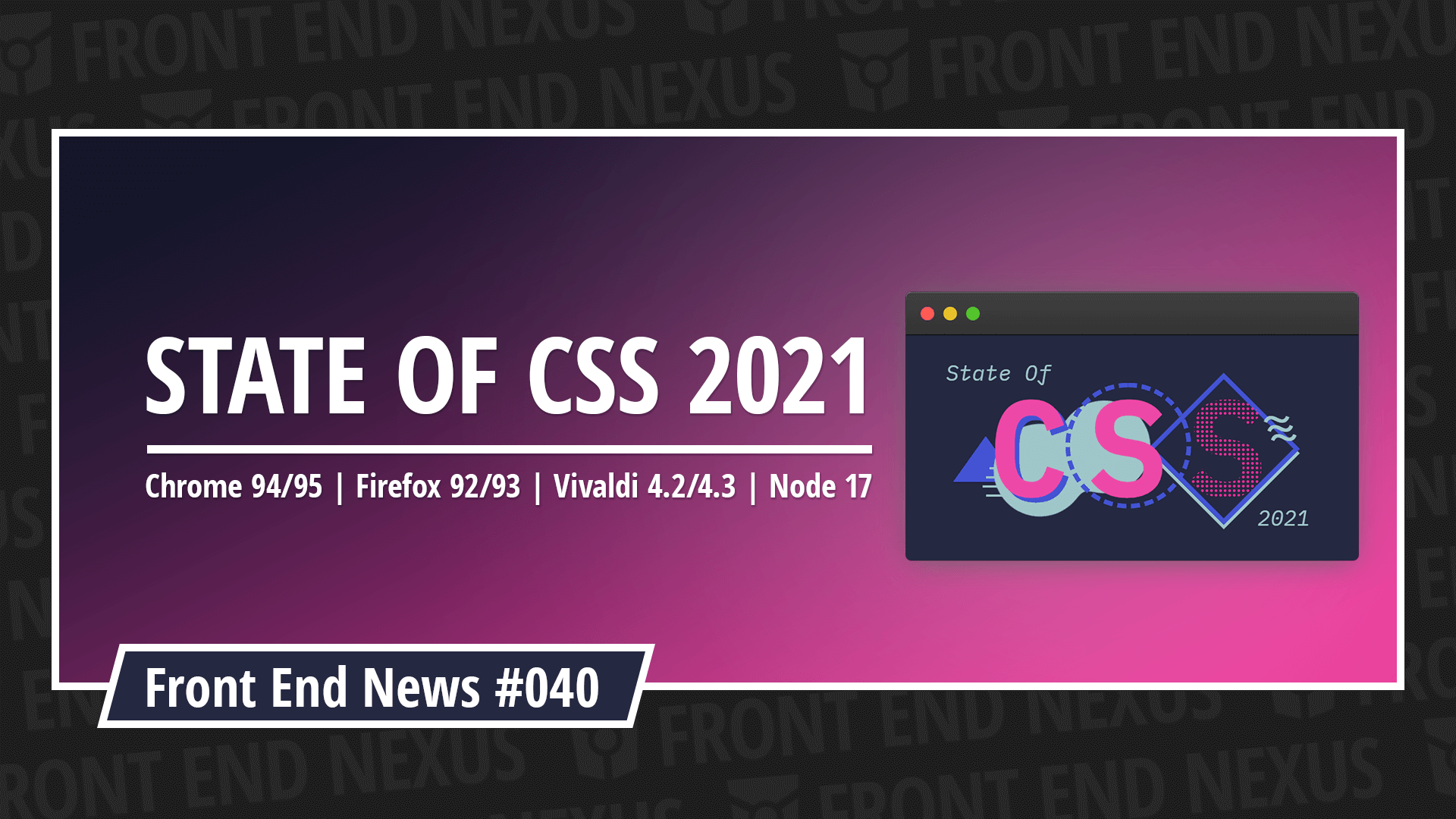 The 2021 edition of the State of CSS survey is up again. The Web Almanac team is already looking for collaborators for the next year's edition. The js13kGames 2021 winners have been announced. We have double updates from most browser vendors: Chrome 94 and 95, Firefox 92 and 93, Vivaldi 4.2 and 4.3. The software updates are numerous as well, including Node 17, npm 8, TypeScript 4.5 Beta, Electron 15, and many, many more.

The State of CSS survey is a very valuable tool for the industry as a way to measure what developers really use in their day-to-day work. So here we are, already, with the 2021 edition. Have you taken it yet?

What surveys do by asking people directly, the Web Almanac does by scrapping data from real websites. Previous editions have enjoyed an awesome reception from the industry and the 2021 edition is expected to be published soon. Yet, the team behind the project is already looking to collaborators for next year's edition. If this is something that might interest you, then use the form below to sign up.

js13kGames is a JavaScript coding competition running yearly since 2012. This year the theme of the event was "Space" and the jury has picked up the winners. A special mention is a partial recreation of the classic Quake video game - I tried it already and it is really awesome.

Brave Search is now the default search engine option for new users in five countries: USA, Canada, UK, France, and Germany. If you use the browser already, then your current choice is preserved, but you have the possibility to make the switch.

There have been TWO Chrome updates since I published the latest update, which means there are a lot of things to cover.

Chrome 94 opens up two new APIs: Web Codecs (for low-level access to built-in media components and codecs) and WebGPU (for access to Direct3D 12, Metal, and Vulkan functionality). Last but not least <canvas> elements start now by default in sRGB color space, with the option to switch to the P3 one at any time.

Developers can now set DevTools in their preferred language, container queries are now marked with a new interactive badge, and a lot more.

We arrive now at the latest release, and there are two new APIs in Chrome 95 as well. URLPattern standardizes routing pattern syntax, while the Eye Dropper API makes picking up a color a breeze.

Coming to Firefox, there are two new releases for this browser as well.

Firefox 92 brings more secure connections, as the browser can now automatically switch to HTTPS. There are also many quality-of-life improvements for the end-users, especially those using devices running macOS.

Developers can now enjoy two new features. There are some CSS updates making accent-color and size-adjust available to everyone, as well as changes to break-inside, font-size-adjust, and system-ui. On the JavaScript side, there is now support for the new Object.hasOwn() static method. More details are available in the announcement post.

Firefox 93 brings over support for the AVIF image format, better memory management, downloads from insecure sources are blocked by default, and more.

Developers now have access to static initialization blocks in JavaScript and better support for custom elements and the Shadow DOM. I can't claim to understand much of what's happening here, so feel free to check the release notes for more details.

The 4.2 update brings private in-page translation, easy sharing of information via QR codes, and many smaller improvements and fixes (full details in the link below)

I wish Safari would have released two new versions as well, but I have to be content with two releases of the Safari Technology Preview instead.

Update 132 brings a long list of fixes and small improvements. But I think update 133 takes the spotlight with support for Object.hasOwn, CSS Cascade Layers, the CSS Font Loading API, basic support for the Storage API, and a lot more. Feel free to check the release notes for full details.

That's about all I have for this update. If you enjoyed this newsletter, there are a couple of ways to support it. You can share the link to this issue on social media, and follow me on Twitter. Each one of these helps me out and I'd appreciate your consideration.

Have a great and productive time, keep yourselves safe, and I will see you again next time!